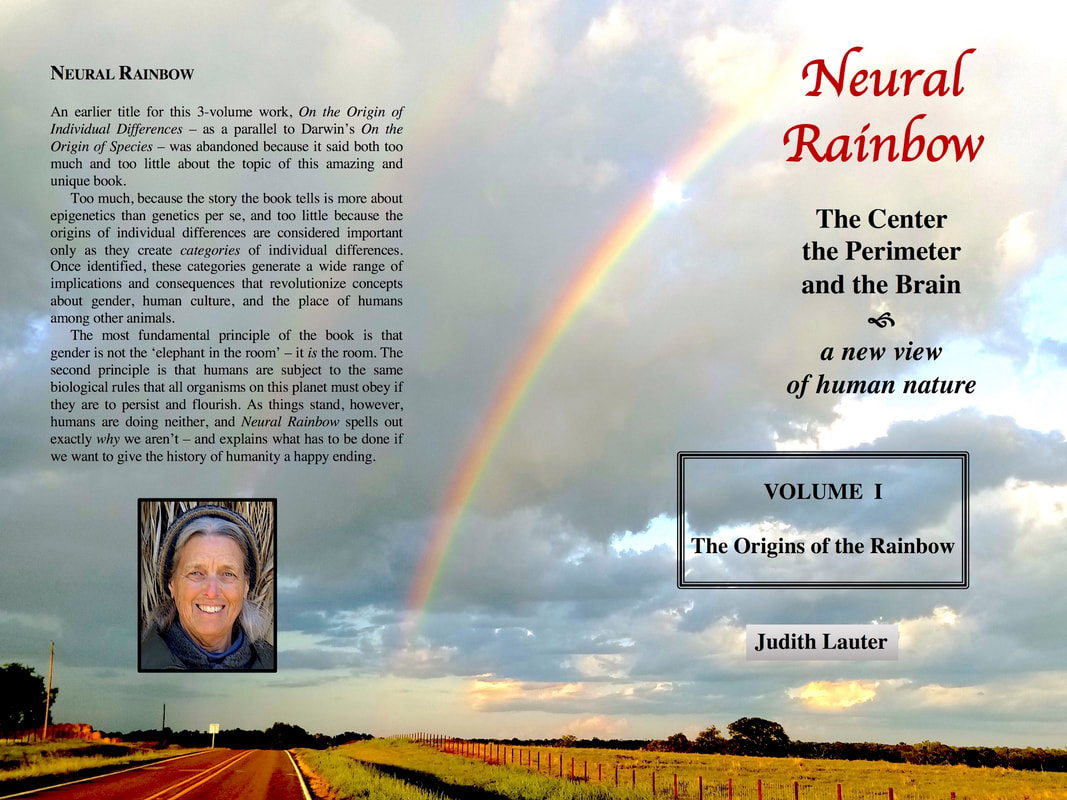 * * * * * *
Excerpted from Lauter JL (Volume One, Xlibris, 2022) -- (click here for book posting)
Neural Rainbow: The Center, the Perimeter, and the Brain –
A new view of human nature
* *  VOLUME One, The Origins of the Rainbow * *
---------
A note to the reader: How this book differs from most evolutionary-psychology/ eco-apocalypse/new-humanist treatises

Today there are many books attempting to explain human beings and human history, and they all seem to me to share a certain structure.  Such books typically begin with a description of human nature defined in terms of our biological and evolutionary beginnings, then go on to review the events of human history (both “prehistory” and recorded history) up to the present day.

At this point these books often peer with horror into our truncated future, the cliff of species extinction (our own and many others) and the environmental breakdown toward which we seem to be rushing.  I suspect, in fact, that it is precisely the growing realization of the reality of that cliff which has inspired authors from such a wide range of backgrounds to try to understand how we got ourselves into this fix.

My book follows a similar curve, but differs crucially in its details.  Some of these have to do with mechanisms, which I will discuss in due course.  However, there are also several major assumptions that seem to me to lurk behind virtually all other books on these topics – assumptions which my approach rejects at the outset.

These (often unstated) assumptions are:

1) The best if not exclusive source of information regarding the biological basis of  individual human psychology and group behavior is found in our “closest relatives” the great apes – in particular, chimpanzees.

2) The most natural social organization for human beings is living as female/male pair-bonds, gathered into relatively large groups -- much like migrating Canada geese. “Most natural” under this assumption means we have always lived as pair bonds, an arrangement supposedly as much a part of our species definition as the shape of our pharyngeal cavities or our upright posture. Some authors even suggest that it was the
adoption of this type of social organization which accelerated the evolutionary expansion of human intelligence – “Monogamy is Mental.”

3) Humans have always killed and eaten other mammals for food. Carnivorism too is supposedly part of our species definition, and some suggest that, like monogamy, it may have accelerated the growth of human intelligence – “Meat is Mental.”

4) Humans have never lived for any appreciable amount of time, or in appreciable numbers, in a way which is sustainable, characterized by peaceful relations with neighbors and the surrounding world. Any contentions to the contrary are scoffed at as instances of the “Golden Age fantasy” or the “Rousseauian myth.” And, the            complexity of thought supposedly required for personal and organized violence is suggested as yet another factor leading to the expanded human brain – “Murder and Mayhem are Mental.”

5) Over the past 5,000 years, in spite of a nagging underbelly of war, violence, and genocide, things in general have been getting better for humans as a species – we have been “rising from animals,” “rising from chimps,” “rising to civilization.”

6) All humans are capable of brutality and evil – “we are all genociders,” says one author.

7) Finally, the assumption that may be the basis for all the others – that maleness is the measure of all things. Explanations of human nature, including its connections to other animals, typically begin with and focus on adult male psychology and behavior, such that females and children are considered only as satellites to males and male motivations. The intelligence of the adult male of a species is implicitly considered to be superior to that of either children or females, and human societies dominated by men are considered to be more advanced than those managed by women – thus,“Maleness is Mental.”

I reject all of these assumptions -- not out of wishful thinking, fantasy, or religious faith, but for purely scientific reasons, which derive in part from facts that were not available to most of the other authors, and in part from a new interpretation of a host of facts that have been known for some time.

For compositional reasons, this book is not organized according to these rejected assumptions; but as it proceeds, I will discuss my alternatives to them in detail.  In doing so, I hope to draw the outlines of a deeper, more accurate and nuanced understanding of the biological nature of human nature, our unusual history, and our most uncertain future.
* * *
Neural Rainbow

SUMMARY TABLE OF CONTENTS
FOR ALL THREE VOLUMES
(Chapters 1-16, titles only)

Volume One – The Origins of the Rainbow
[Preliminaries]
Preface to Neural Rainbow (2022 edition)
Preface to Neural Rainbow (2005 edition)
How this book is different
Volume One title page & contents
1. The history of typologies:
Categories of individual variation
2. Sex hormones and brain connectivity
3. The Trimodal Model of Brain Organization:
Three brain types, six genders
4. Social organization: Niches, choices, social roles,
brain types, genders
5. Human history: Where we came from and when
--------
Preview of Vol. Two
Appendix
About the Author

Volume Two – The Rainbow Distorted
6. Why didn’t we know? Newspeak and the big coverup
7. Newspeak to the max: The Great World Religions
8. What they’ve been doing: War & violence
9. Refracting the rainbow: Art & literature 1
10. Refracting the rainbow: Art & literature 2
--------
Preview of Vol. Three
Appendix
About the Author

Volume Three – Living under the Rainbow
Prologue
11. Conception, birth, childhood
12. Puberty and adolescence
13. Adulthood
14. Growing old: The second clearwater time
15. Death and dying: The second birthday
16. Is there a pot of gold? Recommendations for the future