More species of birds make their winter home in Texas than in any other state.  Nueces County, located on the Texas Coastal Bend, receives so many species from the Missouri/Mississippi and the Central Flyways of North America that for the last 10 years the American Audubon Society has declared it and the county seat Corpus Christi the "birdiest" county and city in the nation.

Padre Island, the barrier island that lies just off the Gulf coast at this point, extends approximately 113 miles south.  It is not only the longest barrier island in the world, but the Padre Island National Seashore, which protects the majority of the island, makes it the longest undeveloped barrier island.  Many migrating birds overwinter on Padre Island and adjacent areas, while still others use this coastline as a dependable stopover on flights destined for even further south.  In all, Padre Island provides a seasonal home to more than 380 bird species – about half of all those found in the United States.  In addition, migrating insects such as the monarch butterfly also depend on the plains, beaches, and wetlands of the Coastal Bend for support during their long travels.

While I was growing up in Austin TX, my family made its own migrations to the Coastal Bend.  My dad was a hobby fisherman, so we regularly visited Gulf beaches around Corpus Christi – and one of my earliest memories is my mom and grandmother laying out a picnic lunch on a warm beach, while my dad waded into the surf to try his luck.

After my parents moved us to Michigan, I did not live in Texas again for almost 50 years, but all that time the Gulf Coast remained alive in my memory as a beautiful, somewhat vague image of blue sky, green sea, and long, curving beaches – much the way it may appear in the minds of the many birds who return here year after year, to make their winter home.

So when Ken and I moved back to Texas in 2001, one of the first things I wanted to do was take our own flyway to Corpus – and we have been spending a month or so around Christmas here ever since.  It has been a vivifying seasonal migration for us, and we learn more about the coast and its amazing diversity of weathers, plants, and animals, every time we come.

Notes (species names and other info about the birds, plants, etc. shown in the photos) 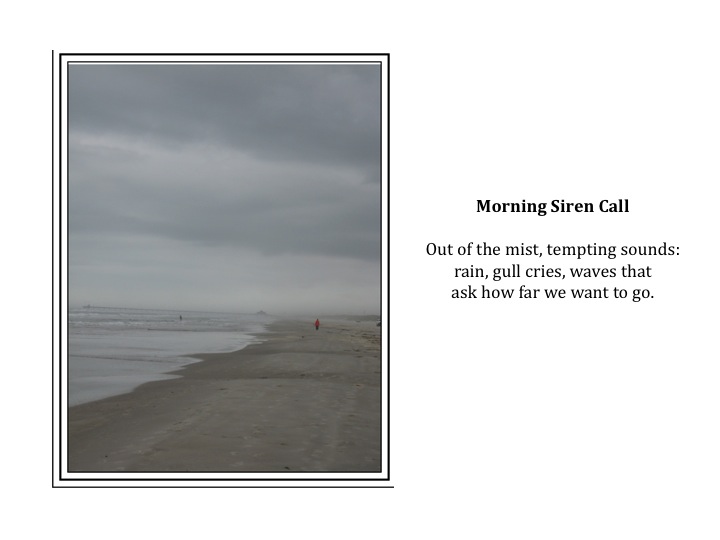