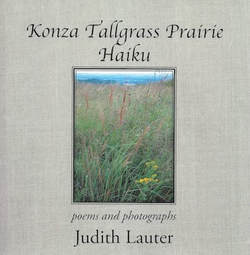 order from Xlibris (﻿softcover﻿ or ebook)

***Copies of selected photographs from this book can be
purchased at FineArtAmerica.com, as greeting cards, prints,
phone covers, etc.***

*****
Excerpts below include:
Preface; Table of Contents; sample pages
PREFACE

Konza Tallgrass Prairie (kpbs.konza.ksu.edu) is located just south of Manhattan KS, toward the northern end of the beautiful Flint Hills that extend from the northern border of Kansas southward into Oklahoma.  (See top map, facing page; source cited in the endnotes.)

The focal site of the prairie is the Konza Prairie Biological Station (KPBS -- marked as "Konza Prairie," lower map, facing page), an 8000+-acre preserve based on a land purchase made between 1971 and 1979 by the Nature Conservancy for Kansas State University, under the leadership of K-State Professor Lloyd C. Hulbert (http://kpbs.konza.k-state.edu/history/ hulbert.html), with funds provided by Katherine Ordway.  The name "Konza" was chosen to honor the Kansa, a Native American tribe that once lived in the area.

The Prairie is managed by the K-State Division of Biology, and is one of the largest remaining fragments of the 167 million acres of tallgrass prairie that historically formed the eastern boundary of the Great Plains of North America, the largest continuous ecosystem on this continent, with a complexity and diversity of plant and animal life in the western hemisphere second only to the rain forests of Brazil (see map next page).

To the west of the tallgrass prairies (30-35 inches of precipitation annually) are mixed-grass prairies (20-30 inches annually), followed by the shortgrass prairies (10-20 inches) of the High Plains, extending to the Rocky Mountains.  All three prairie regions originally reached from Texas and the Gulf Coast northward to southern Canada. East and west, the tallgrass itself extended from the western edge of Indiana into eastern portions of the Dakotas, Nebraska and Kansas, the Flint Hills of south-central Kansas and Northern Oklahoma, and a small band of land in central Texas.

Today as more and more of the Great Plains are bulldozed for agriculture, there is increasing interest in saving the few areas where portions of the prairies are still more or less intact, as well as re-establishing native ecologies where possible.  In Kansas, the Konza Prairie, along with the Tallgrass Prairie Reserve a few miles further south along Kansas 177, offer two of the most successful of these ventures.

I have been around prairies for much of my life.  Growing up in Austin TX, I learned to love the short-grass savannahs of the Edwards Plateau, the Texas Hill Country, to our west, and the Blackland Tallgrass region immediately to our east.  In Missouri, my husband Ken and I lived for a number of years near the Shaw Nature Reserve, a 2400-acre tallgrass preserve outside Gray Summit MO that combines uplands, woodlands, prairies, and wetlands.

For a decade, we also lived on the mixed-grass prairies of central Oklahoma, and frequently visited the Wichita Mountains Refuge near Lawton OK, with its thriving bison herd.  We have subsequently enjoyed extended trips to the High-Plains shortgrass prairies in the foothills of the Sangre de Cristo Mountains of northern New Mexico, including the Rio Mora Wildlife Refuge near Mora NM, dedicated (as is Konza), to re-establishing natural prairie stewards such as bison herds, colonies of prairie dogs, and regular natural fires.

We were introduced to the Konza Prairie by our good friend Jerry Williams, who, while a doctoral student at K-State, spent many hours exploring the Flint Hills around Manhattan.  He encouraged us to pay Konza a visit; we finally did that in the early fall of 2016, and this book is the result.

The structure of the book revisits our strategy during that visit: we made an early start in Manhattan, driving southeast on McDowell Creek Road along the south bank of the Kaw (Kansas) River; arriving at the Konza Prairie Biological Station, we followed trails through the shady gallery forest along Kings Creek; and eventually climbed the easy slope of the hill to the lookouts, with truly stunning views.  One of the first haiku to emerge on those hikes was this:

Hear the morning river, seek
a creek, then climb these
hills where all the creeks begin.

Morning: The river, a creek, and a trail
Prairies Even Above Us
The Kaw Below McDowell Creek
What the Cottonwoods Say
Finding the Trail
Kings Creek

Completing the Day: The overlook
Achieving the Hill
Black Saddlebags Dragonfly
Monarchs Take on Fuel
Horizon
Campfires in the West 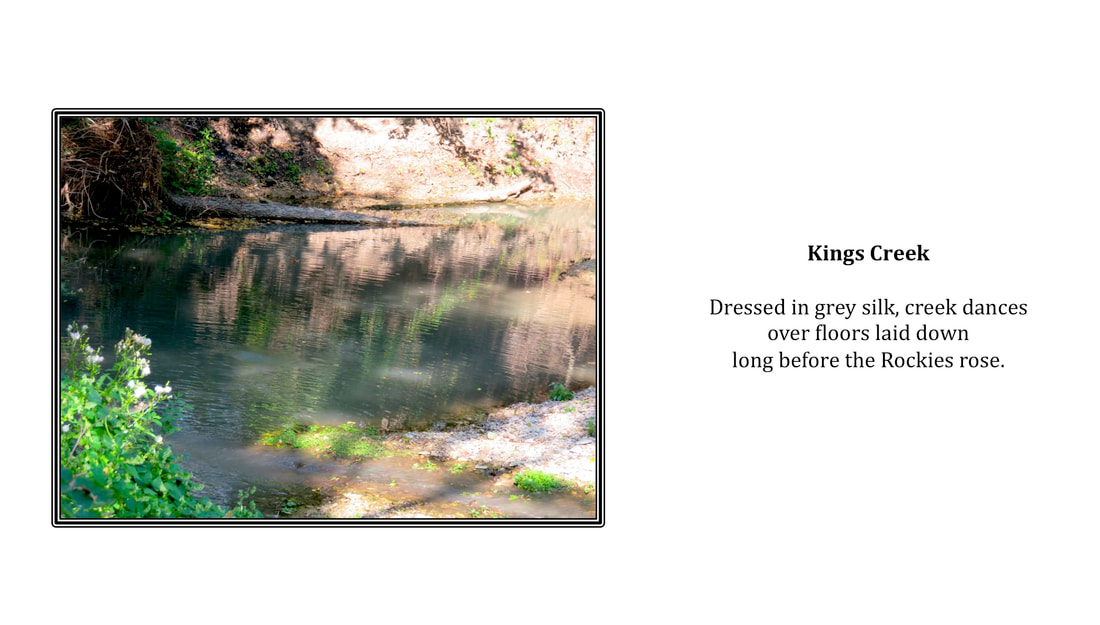